Coby Frier and Butch Bradley, owners of Butch Bradley’s Comedy Hideaway in Atlantic City, NJ are not paying comedians. While they may be compensating larger acts that come through the club, they are preying on smaller, less known comedians to pad their shows with free comedians. They’re also not paying comedians they hire to work the club in the feature and headliner positions. When finally pressed on this issue publicly, both Butch and Coby have tweeted libelous accusations that are not only unfounded, but which can be refuted by eye-witnesses AND video proof.

I’m urging all comedians, fans of comedy, and entertainment seekers in general to find somewhere else to spend your money in Atlantic City. We’ll be listing other comedy venues in Atlantic City on this website so that you can have a fun night out without worrying about whether or not the club you’re at is taking advantage of comedians. 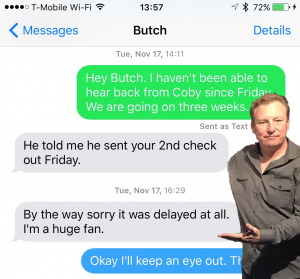 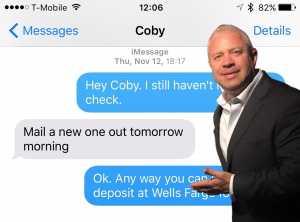 I recently told the entire story of this ordeal on my podcast, and followed up with updates Friday night with comedian James Hesky and adult film actress and Coby Frier’s ex-partner, Britney Shannon. It’s a long watch, but it’s here for those interested. Also available in audio on iTunes.

I can assure you it isn’t. No money. More taunting. 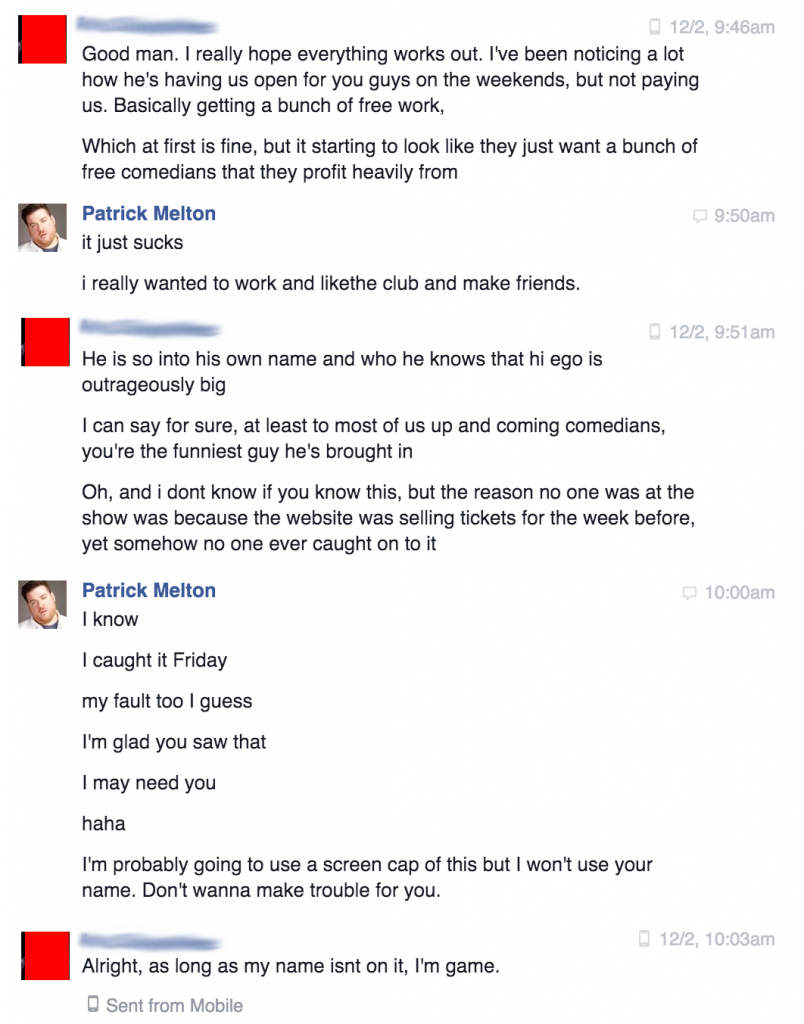 (I know this means nothing without a name, but I am not going to cost young comics stage time because of assholes.)

These texts are chronological and all dates are correctly labeled. 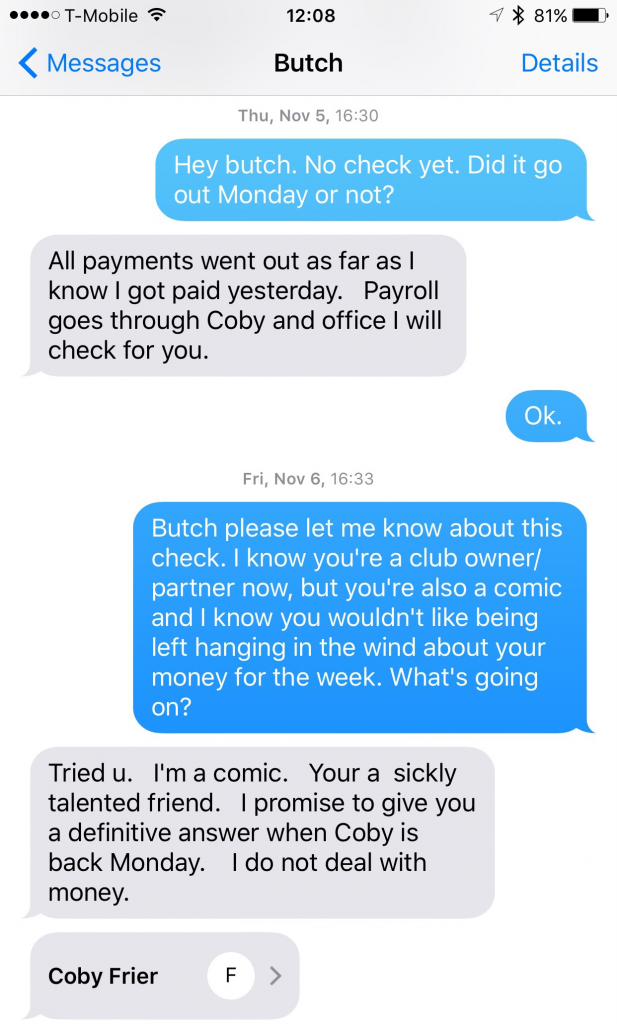 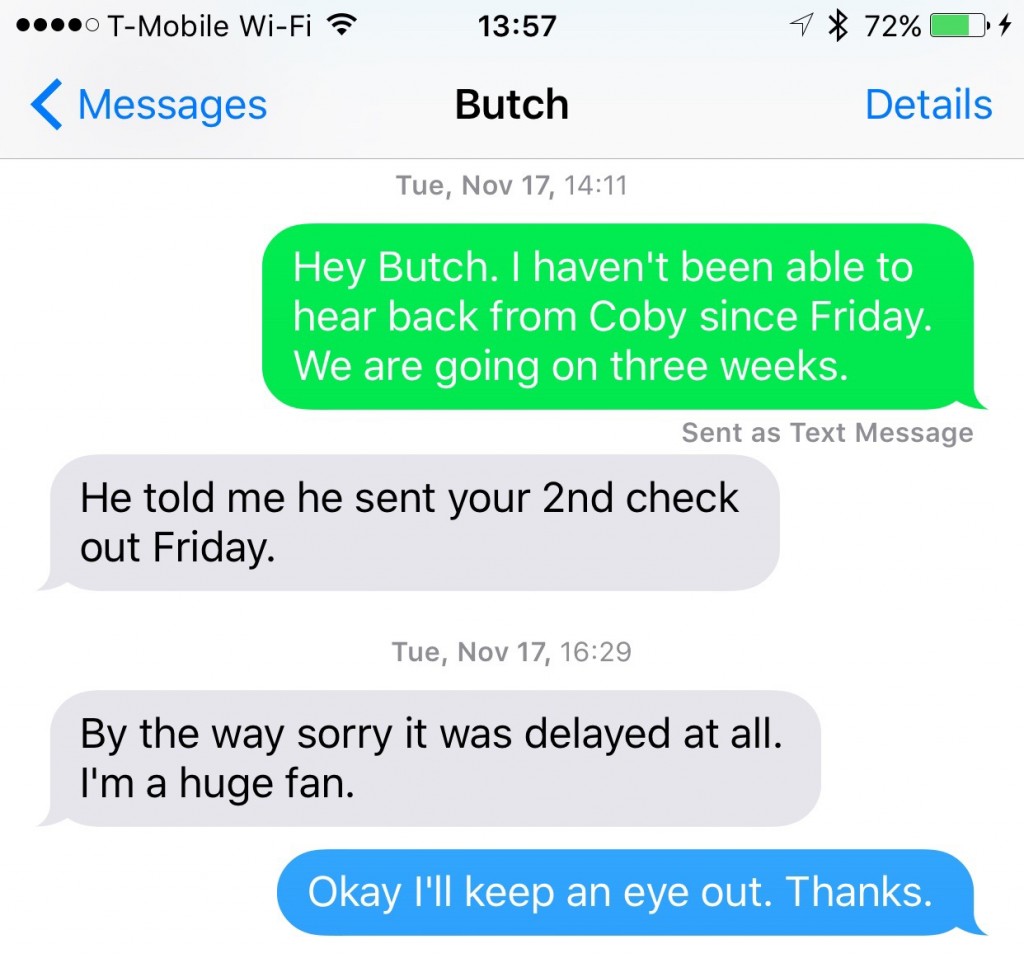 No responses after that. Coby, at this point, hadn’t responded to me in about two weeks, despite allegedly mailing two other checks. Over a week later and no mysterious third check either. If you sent out one or two checks that never got there, wouldn’t you double check the address with the person you’re sending it to? Also tweets and texts since from Coby admitting not paying me was intentional, calling me names, and absolutely lying about the events of the weekend. Butch has told another comedian who wasn’t paid that he would pay him out of his pocket, too. I just want a check from the business that owes me $1200.

Two updates. Number one, Coby has reached out to another comic he owes money too (only $200), and is offering to pay him (claiming the non-payment was an oversight) in order to stop cooperating with this effort. He’s also admitted that he NEVER intended to pay me (Patrick Melton), despite being hired to work six shows, being told three checks were mailed, and then being ignored completely for over two weeks. NOW they’re trying to do damage control as inexpensively as possible. 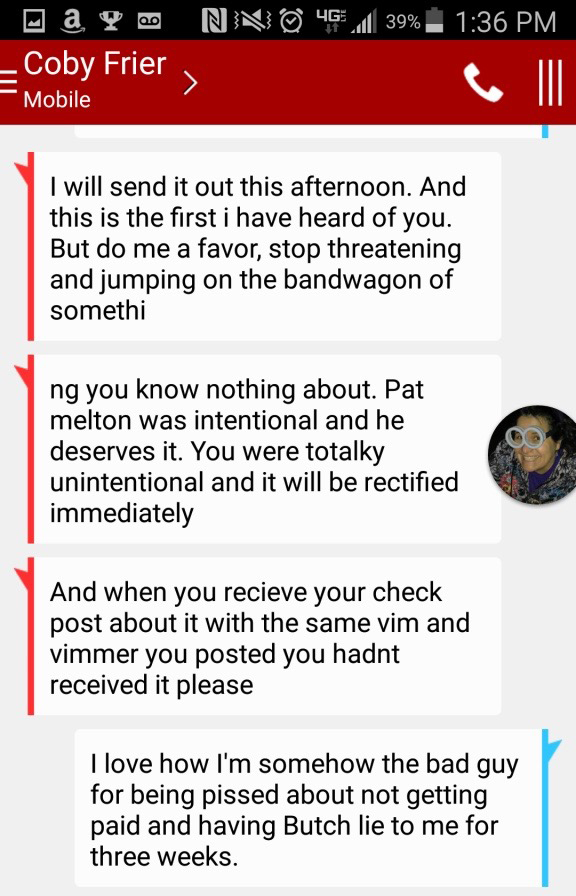 First time you’ve heard of the feature that worked your club over three weeks ago? Weird. What about all those checks Butch kept saying you cut?

And myself (Patrick Melton) deserved to not get paid? You shook my hand and said the check would be sent and lied for weeks about multiple checks. Good business.

I have now been told both verbally and by text that Butch is having some “cousins” or “friends” come see me to give me a “hug” “soon.” This was followed up by a text at 3:30 this morning that simply said “Here.” I’m not trying to turn this page into a tome of screenshots and media, but I’d like to make a record of the threats on this page. Threatening a comedian who you hired to work your club after he speaks out for non-payment is not a way to fix this. ALL this site is fighting for is the money owed to comedians by clubs that employed them. This is a very simple issue. You have a checkbook and you have comedians addresses from the tax paperwork we filled out. Honor your word. I’ll be speaking to a few news outlets today about this story. 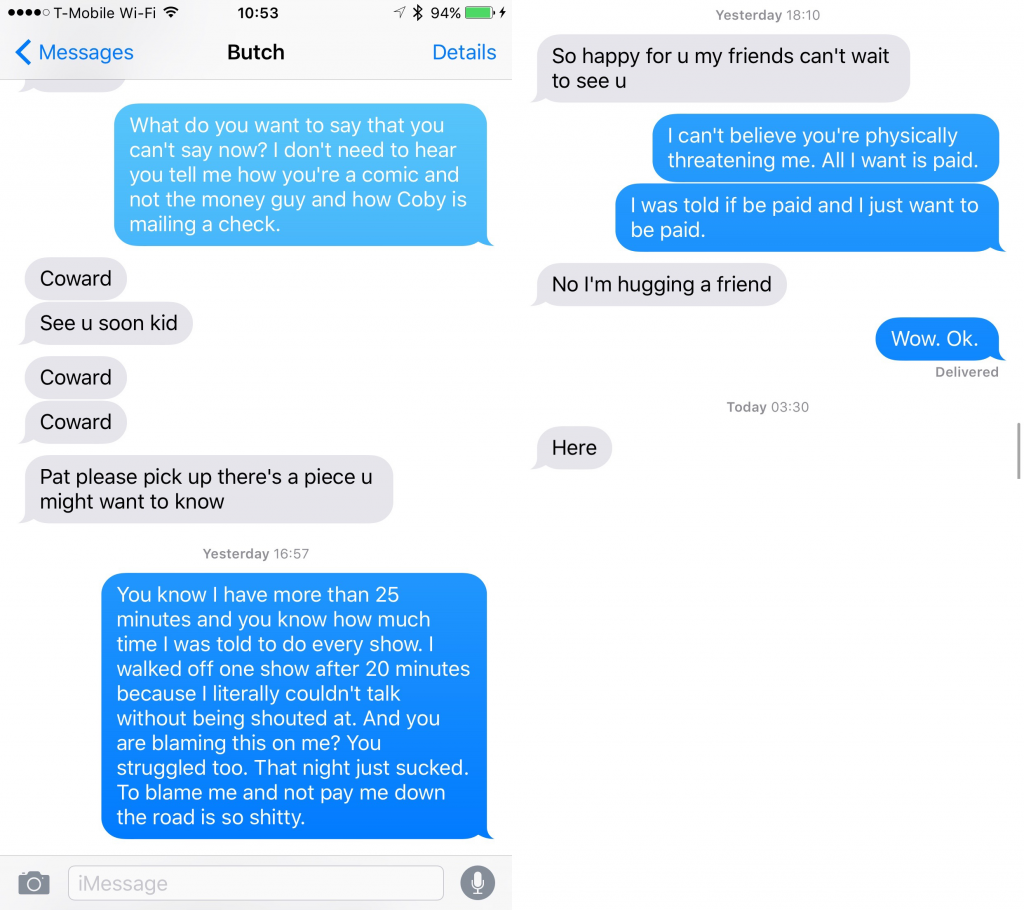 What’s going on over at Butch Bradley’ Comedy Hideaway? I’m a comedian of 14 years. I headlined the club over a month ago, and have yet to be paid. I’ve been told that THREE checks have been mailed, and now Butch and Coby are lying about me, calling me unprofessional and saying I didn’t perform. I have VIDEO proof of my shows, along with the insane conditions I had to endure on stage from the club. Coby Frier was not at all the club all weekend, and has no idea what was going on that weekend. For him to speculate based on what he’s been told is irresponsible, considering the LIES that are being told about me.

For instance, I missed appearing on radio Friday morning, October 30th to promote my shows. Butch tried to get me to pretend I was asleep or missing because HE was too drunk to come and get me. I was up, responding, and ready to go.

And then, Coby was LIED to and told I disappeared during a show. This is just not true. The rest is true – I walk off stage just about every time I walk on. I’m happy to post video from any of these shows. I’ve refrained from doing so until now because of some sensitive behavior and things said by Butch Bradley. I’m happy to post them later. 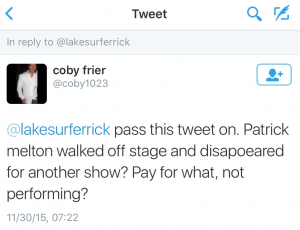 Butch and Coby can continue to libel my name and I’ll continue to collect the evidence. I’ve been a comedian for fourteen years and never been accused of not performing. I’ve also never had a club so outrageously lie about sending checks and then completely disappear from communicating altogether. Stay tuned to this site for a complete collection of screenshots and video, with the entire rundown of my weekend at this club. I wasn’t going to post all these embarrassing details about the club. I just wanted my compensation as promised. Butch and Coby continue to spread negative things about me. I’ll post the truth here.

Butch is a comic. He understands you need your money. Here’s another comedian eagerly awaiting checks that never seem to come… 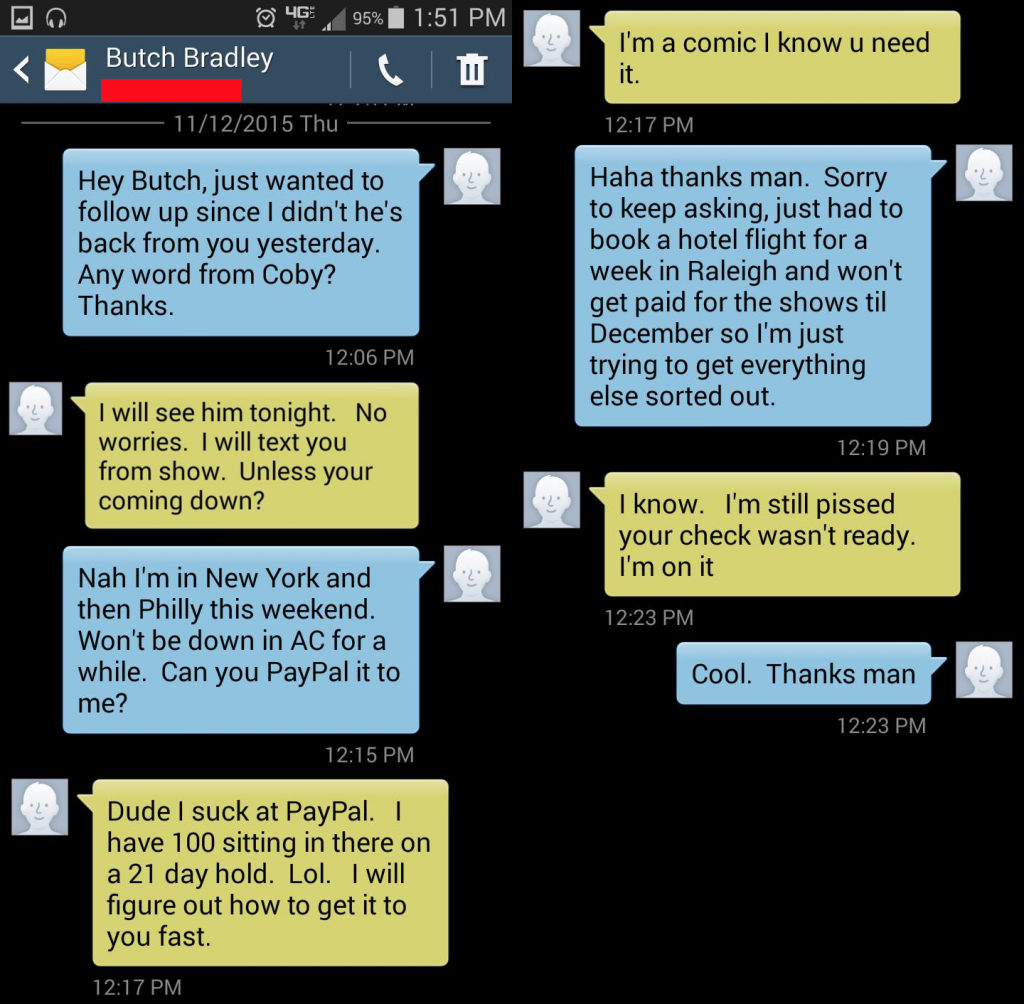 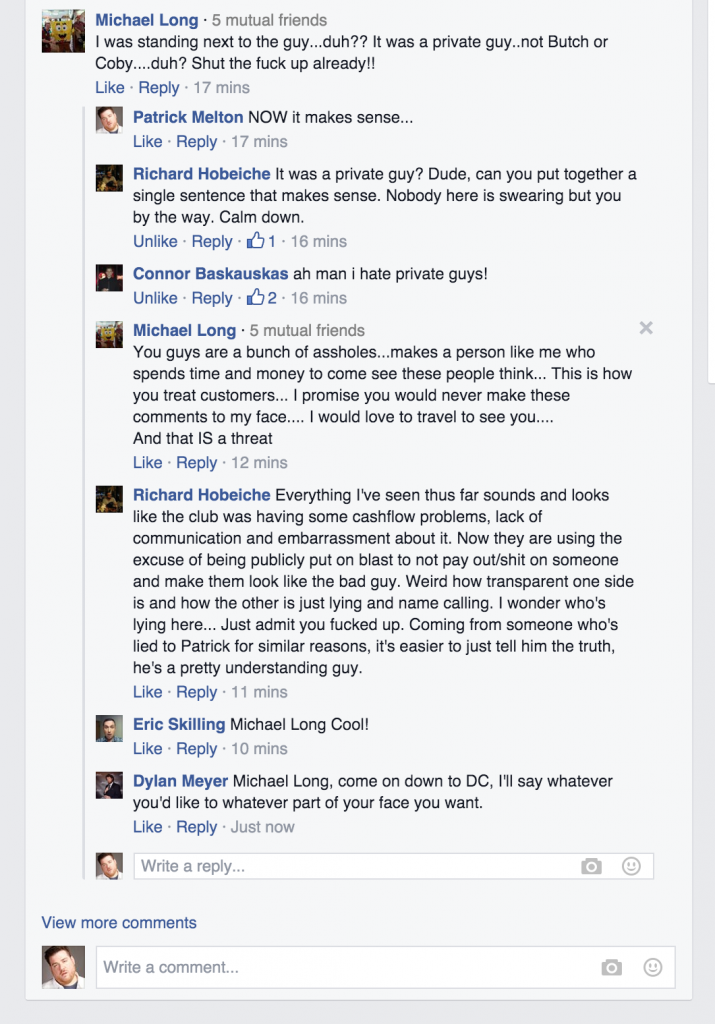 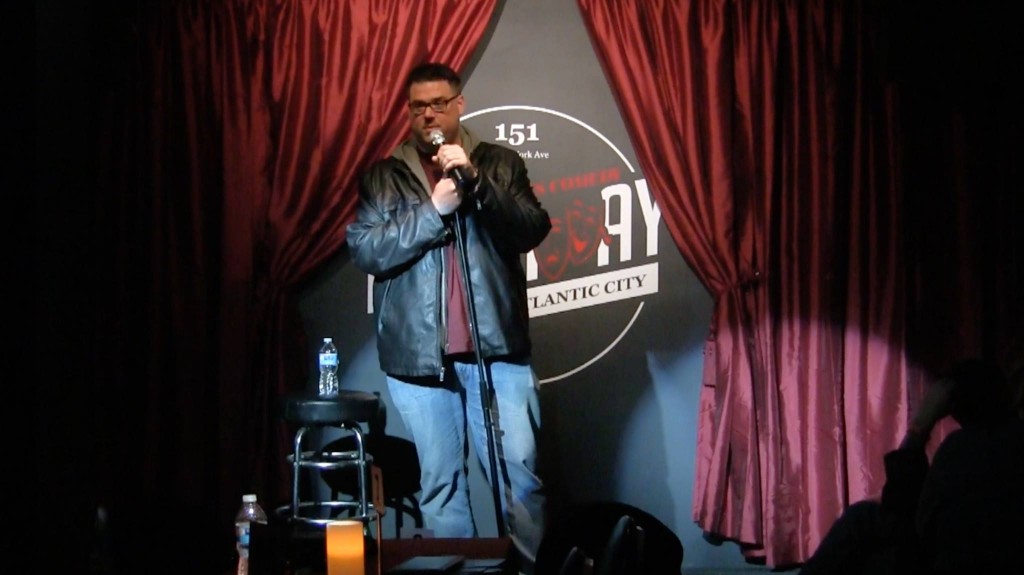 The owners of Butch Bradley’s Comedy Hideaway in Atlantic City have refused to pay me for my week of headlining work. They’re making up many false allegations about the week, but they’ve also lied about sending three checks.

Now they’re attacking my character and professionalism by saying that I don’t deserve to be paid because I was trashed on stage. First of all, that isn’t how this works. You hire a bad comedian, you fire them or pay them. I worked all week. Second, it’s very dangerous to lob allegations of substance abuse.

I have no other choice but to upload the shows from the week to show the conditions I performed under. Luckily this won’t burn much of my material since the majority of what I did was just interacting with the constant heckling I received nightly that went unpoliced and even encouraged. Is this a shining example of what I want people to think my comedy is? No. Was I the worst thing in this club on any night of the week? Nope.

This is the WORST show of the week, so I’ll start with that. These headline sets were supposed to be around 30 minutes. Some nights 25. I walked off this night around 20 because I couldn’t talk without being heckled by one of the 4 people in the front, or Butch from the bar. You’ll see. Slightly unprofessional? Maybe. Not as unprofessional as not having ANY announcements before your show about putting your phones away and not talking/heckling during a show.

Nothing to hide here. I’ll post them all once I get them pulled.